Fierce battles have continued to rage in eastern Ukraine with Russian troops on the verge of encircling a key industrial city, bringing a sharp rebuke of the west from Volodymyr Zelenskiy for not doing enough to help Kyiv win the war.

As the Ukrainian military reported on Thursday that 40 towns in the Donbas region were under Russian bombardment, Luhansk governor Sergiy Gaiday described fighting outside Sievierodonetsk, a key military goal for Russia, as “very difficult”, saying Russian troops were shelling the city from the outskirts with mortars.

“The coming week will be decisive,” Gaiday said in a video posted on Telegram, adding he believes Russia’s goal is to “capture the Luhansk region no matter what cost”.

“There is a colossal amount of shelling,” he added.

Having failed to seize Ukraine’s capital or its second city, Kharkiv, after invading in February, Russia is trying to take full control of the Donbas, comprised of two eastern provinces Moscow claims on behalf of separatists.

Russia has poured thousands of troops into the region, attacking from three sides in an attempt to encircle Ukrainian forces holding out in Sievierodonetsk and its twin, Lysychansk. Their fall would leave the whole of Luhansk province under Russian control, a key Kremlin war aim.

“The occupiers shelled more than 40 towns in Donetsk and Luhansk region, destroying or damaging 47 civilian sites, including 38 homes and a school. As a result of this shelling five civilians died and 12 were wounded,” the joint task force of Ukraine’s armed forces said on Facebook.

Gaiday said police in Lysychansk were collecting bodies of people killed in order to bury them in mass graves. Some 150 people have been buried in a mass grave in one Lysychansk district, he added.

Families of people buried in mass graves will be able to carry out a reburial after the war, and police are issuing documents enabling Ukrainians to secure death certificates for loved ones, Gaiday said.

Zelenskiy said in his nightly address on Wednesday that Russian troops “heavily outnumber us” in some parts of the east and echoed pleas from his foreign minister Dmytro Kuleba to the World Economic Forum in Davos for more weaponry from the west.

“We need the help of our partners – above all, weapons for Ukraine. Full help, without exceptions, without limits, enough to win,” Zelenskiy said in his daily address to the nation.

And he called out the international community for paying too much attention to Russia’s interests and too little to Ukraine’s.

The Ukrainian president blasted a recent New York Times editorial and other similar statements by influential western figures suggesting that Ukraine might have to sacrifice some territory to end the conflict.

UK foreign secretary Liz Truss is expected to call on Thursday for further military aid and sanctions to help Ukraine, during a trip to Bosnia and Herzegovina.

“Russia’s aggression cannot be appeased. It must be met with strength,” Truss is expected to say, noting concessions made to Putin before operations were launched in Georgia, the Crimea and Donbas.

Russia’s invasion of its pro-western neighbour has caused global shockwaves, with the latest being fears of food shortages, particularly in Africa.

Moscow blamed the international sanctions imposed after the invasion, while the west says the shortage is mainly down to Russia’s blockade of Ukrainian ports.

“Solving the food problem requires a comprehensive approach, including the removal of sanctions that have been imposed on Russian exports and financial transactions,” said Russian deputy foreign minister Andrey Rudenko.

But Kuleba urged delegates at Davos in Switzerland not to give in. “This is clear blackmail. You could not find a better example of blackmail in international relations,” Kuleba told the WEF in Davos. Kuleba also slammed the western military alliance Nato for “doing literally nothing” to stop Russia.

We will be in touch to remind you to contribute. Look out for a message in your inbox in . If you have any questions about contributing, please contact us.
Original Source 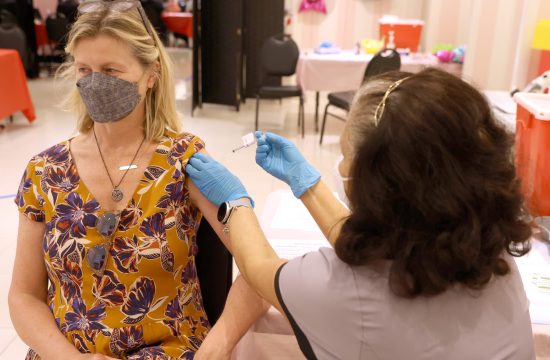